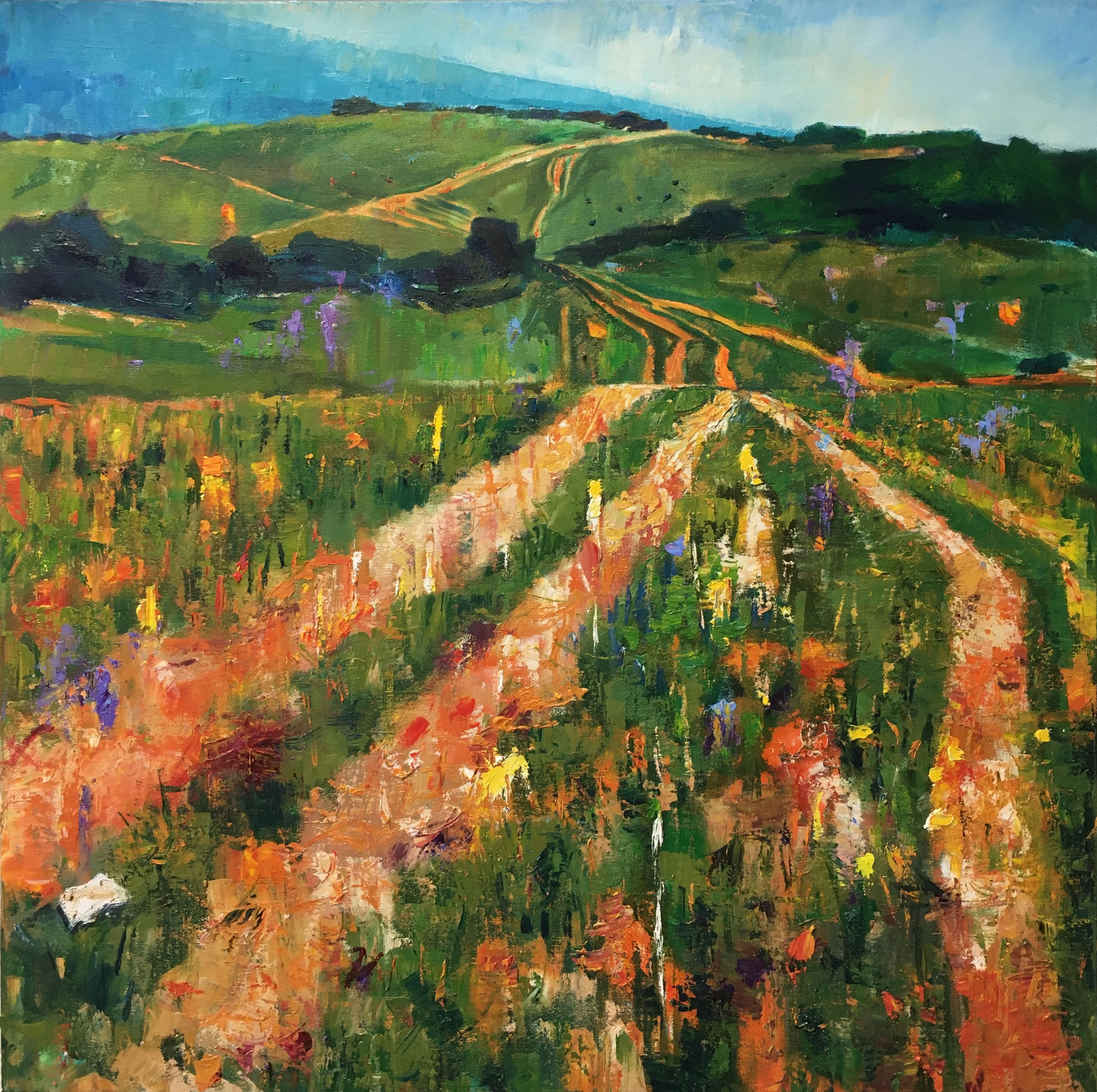 I am excited to share with you the second of my Highlights series.

It is an interesting process to recall how I made these works and what they mean to me.

The painting I have chosen for my Highlights feature this month is called “Purbeck Tracks”.

This was one of a small series painted during 2020. I have long had an interest in foot paths. I love the way humans and animals create their own paths in the landscape. I have a childhood memory of being fascinated by a foot worn track in my local park. People had consistently ignored the formal tarmac path to create their own short cut around a small hill. The path created a beautiful arc which curved through the grass. Successive feet had established and reaffirmed the convenience of this route. It possessed a certain beauty of form. I know this may seem rather banal and inconsequential. But it touched something in me and I remember making a sketch of it as a teenager.

There are times and circumstances when going off-piste is life affirming and is the ‘right’ thing to do. To give one example, my decision to relocate from London to Dorset in 1987 was the right path to take. Dorset had haunted my imagination and I feel at home here.

Being an artist is partly about making choices intuitively and living with a freedom of spirit. There was something profound that I recognised in the dirt track so many years ago. And it still resonates with me today.

Coming to the present. I love the many footpaths paths around the Purbeck coast. When I was young I imagined the hills and coves rolling westward on into infinity. Man and beast have made these tracks for millennia. The lines they scratch on the surface of the land add something to the whole.

I decided to use these tracks as the basis for some paintings in 2020. The time seemed right and I felt the need to reference them. The paths were much more apparent during the dry summer months. The dashes and flecks of colour in the painting are a response to the colours of flowers and insects. To me they are rising up, like free spirits seeking union with the sublime. Something I have lived my life in search of.

I would like to share the famous poem, The Road Not Taken by Robert Frost, which can be interpreted in so many ways.

Two roads diverged in a yellow wood, And sorry I could not travel both And be one traveller, long I stood And looked down one as far as I could To where it bent in the undergrowth;

Then took the other, as just as fair, And having perhaps the better claim, Because it was grassy and wanted wear; Though as for that the passing there Had worn them really about the same,

And both that morning equally lay In leaves no step had trodden black. Oh, I kept the first for another day! Yet knowing how way leads on to way, I doubted if I should ever come back.

I shall be telling this with a sigh Somewhere ages and ages hence: Two roads diverged in a wood, and I— I took the one less travelled by, And that has made all the difference.

Do let me know if you have any queries or would like to see a particular painting highlighted in the future.

I respect your privacy. You may unsubscribe at any time.

Privacy Policy
Client records are regarded as confidential and therefore will not be divulged to any third party. We will not sell, share, or rent any personal information which you provide us with to any third party or use your e-mail address for unsolicited mail. Any emails sent by Stephen Bishop Artist will only be in connection with the provision of agreed services and products and you will always have the option to immediately cancel any further communications.